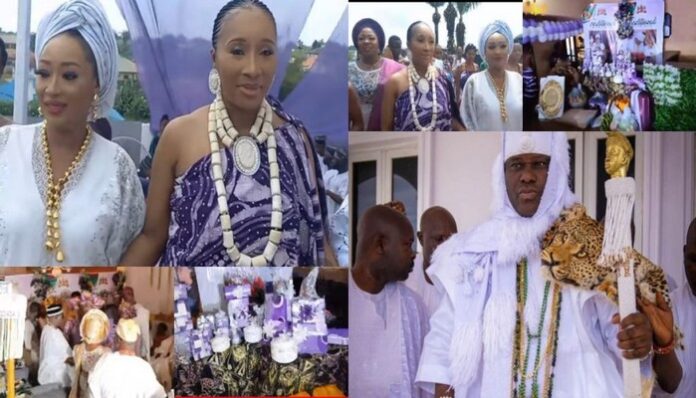 The Ooni of Ile-Ife, HRH Oba Enitan Adeyeye Ogunwusi Ojaja II has taken in Princess Ronke Ademiluyi as his fifth wife, few days after tying the knot with Princess Ashley Adegoke as the fourth.

The traditional wedding of the Ooni of Ife, Oba Enitan Adeyeye Ogunwusi Ojaja II and Princess Ronke Ademiluyi held Thursday October 20, 2022 in Ede, Osun State. Osun State was on luckdown as their Monarch tied the knot for a fifth time.

In videos which made the rounds, the beautiful bride was seen entering the hall in grand style as the Ooni’s chiefs ask for her hand in marriage. As with his previous weddings, the Ooni was nowhere in sight.

The royal guards and maids, palace chiefs and royal staff were there to represent the Yoruba monarch.

Princess Ronke Ademiluyi, who is the soon-to-be 5th wife of the Ooni, had known the King before he ascended throne in 2015.

The monarch’s family members were said to have moved to the late Prince Adeniyi Adegoke’s family house situated on Olubose Street, along Ede road, the ancient city of Ile Ife for the royal wedding.

The London trained lawyer is a very well-known entrepreneur who shuttles between the UK and Nigeria.

The London trained lawyer is a very well-known entrepreneur who shuttled between the UK and Nigeria.

The new Queen is the founder of the popular fashion showcase platforms, the AFWN & AFWL franchises.

The company of the then-prince now Oba Adeyeye Ogunwusi, was one of the major sponsors of the ‘Africa Fashion Week Nigeria’ the fashion showcase platform founded by Princess Ronke Ademiluyi, who is a single mother of one. Ronke’s great-grandfather was Ooni Ademiluyi Ajagun. Moreover, she is in charge of the Queen Moremi Initiative; a global ambassador and founder of the Adire Odua.

Her wedding to the Ooni came up three days after his 48th birthday on October 17.

If you think 5 wives is enough for his royal majesty, then you are wrong as the traditional ruler is reportedly set to pick a 6th wife.

Princess Temitope Adesegun, the alleged soon-to-be wife worked as the Personal Assistant to the late Secretary to the Lagos State Government, Princess Aderenle Adeniran-Ogunsanya during the Babatunde Raji Fashola led administration. Adesegun was said to be once married but divorced.

She is actually based in Lagos and a director of Hope Alive Initiative Poverty Alleviation Advocacy that is powered by the House of Odua inspired by the Ooni.

Her marriage to the Ooni comes up in a few days after Ronke Ademiluyi’s wedding.