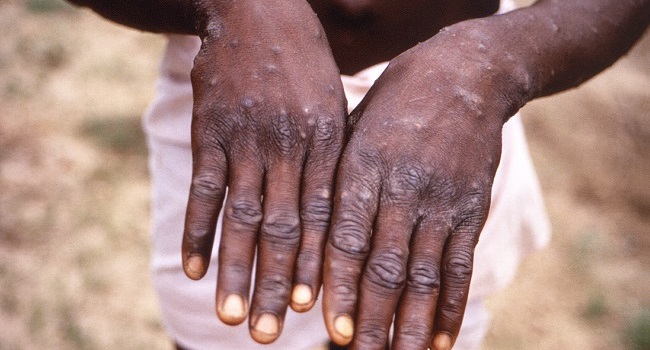 This handout picture depicts the dorsal surfaces of a monkeypox case in a patient who was displaying the appearance of the characteristic rash during its recuperative stage. Photo: AFP

Nigeria has recorded its first death from monkeypox disease since the beginning of the year 2022, the nation’s disease outbreak management agency has said.

In the last five months, Nigeria Centre for Disease Control (NCDC) revealed that it has 21 cases from nine states and the Federal Capital Territory (FCT).

“The death was reported in a 40-year-old patient who had underlying co-morbidity and was on immunosuppressive medications,” NCDC Director-General, Dr Ifedayo Adetifa, said in a statement on Sunday.

“Genomic surveillance is ongoing at NCDC’s National Reference Laboratory in Abuja and so far, all of the cases have been confirmed to be caused by West Africa clade Monkeypox virus.

“Among the 21 cases reported in 2022 so far, there has been no evidence of any new or unusual transmission of the virus, nor changes in its clinical manifestation documented (including symptoms, profile and virulence).”

This, he explained, was based on the report of a preliminary risk assessment done by a group of Subject Matter Experts from the NCDC, as well as relevant government Ministries, Departments and Agencies, and partner agencies.

Prior to the activation of the MPX-EOC, a multi-agency Technical Working Group (TWG) coordinated at the NCDC led Nigeria’s efforts to improve the detection, prevention, and control of monkeypox, the NCDC chief said.

According to him, Nigeria’s national surveillance system – the Surveillance Outbreak Response Management and Analysis System (SORMAS) – was first deployed in response to the 2017 monkeypox outbreak to improve the timeliness and completeness of case reporting, as well as facilitate the overall response.

“Following the detection of the index case on September 22, 2017, and the effective containment of the 2017 outbreak in Nigeria, the NCDC through the Monkeypox TWG worked on various interventions to gain a better understanding of the epidemiology of the virus to inform preparedness and response in-country.”

The NCDC said Nigeria’s risk of exposure to the monkeypox virus was high based on the recent risk assessment conducted.

It, however, noted that the current situation in-country and globally has shown no significant threat to life or the community that can result in severe disease or high case fatality rate., while the EOC would continue to monitor the evolving situation to inform public health action accordingly.

Symptoms of monkeypox include sudden fever, headache, body pain, weakness, sore throat, enlargement of glands (lymph nodes) in the neck and under the jaw, followed by the appearance of a rash (often solid or fluid-filled at the onset) on the face, palms, soles of the feet, genitals, and other parts of the body.

The NCDC emphasised that members of the public should remain aware of the risk of monkeypox and adhere to public health safety measures and report to the nearest health facility if they notice the known signs and symptoms of the disease.

Healthcare workers were also advised to maintain a high index of suspicion for monkeypox and report any suspected case to the relevant state Epidemiology Team for prompt public health intervention, including sampling for confirmatory testing.