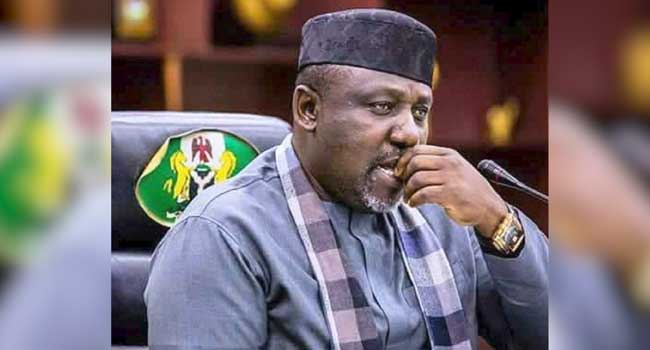 The Federal High Court in Abuja has remanded a former governor of Imo State, Rochas Okorocha, in the custody of the Economic and Financial Crimes Commission (EFCC).

Justice Inyang Ekwo ordered his remand on Monday following the arraignment of the former governor in court by the anti-graft agency.

He also adjourned the case until Tuesday for a hearing of the bail application filed by Okorocha, who currently represents Imo West senatorial district in the National Assembly.

The former governor is being tried on a 17-count charge to the tune of N2.9 billion filed against him by the anti-graft agency.

He was accused of conspiring with others, including a member of the APC and five companies to steal from public coffers, although he has since denied any wrongdoing.

The courtroom was already filled to capacity as of 9am before the commencement of the proceedings, with several others standing as they await the arrival of the judge.

Senator Rochas Okorocha was brought to the Federal High Court in Abuja by EFCC operatives on May 30, 2022.

When the proceedings began, the lawmaker took a stand in the dock after which the charges were read to him.

After taking their plea, Okorocha’s lawyer, Mr Okey Amaechi, prayed the court to release his client on bail, pending the determination of the case against him.

Amaechi also drew the attention of the court to the fact that his client was roughly arrested before the screening of the presidential aspirants of the APC.

But the EFCC, through its lawyer, Mr Gbolahan Latona, told the court that Okorocha raised some issues in his bail application that would require its response.

Justice Ekwo, thereafter, adjourned the matter until Tuesday to hear the bail applications of the defendants and ordered that they should remain in EFCC custody, pending the determination of their bail applications.

Following his remand by the judge, Okorocha will be spending his seventh night in EFCC custody since he was picked up by a team of operatives who stormed his residence in the Maitama area of Abuja last Tuesday.

The team, who insisted that Okorocha must submit himself for arrest or honour a long-standing invitation to their office, later barricaded the residence of the presidential aspirant.

Following a series of drama at the scene, gunshots were heard as the anti-graft agency’s team broke into Okorocha’s house and left with the presidential aspirant to their office.

On Friday last week, he lost his request to the court to be admitted on bail, pending the determination of a suit he had instituted against the Federal Government.

The lawmaker had predicated his bail request on the ground that he was a presidential aspirant, stressing that his political ambition would be jeopardised unless he was granted bail.

But Justice Ekwo, in a brief ruling on Okorocha’s bail application at the time, said he was not inclined to admit the applicant to bail.

Rather, the judge ordered Okorocha to put the Federal Government on notice to come and defend his detention.