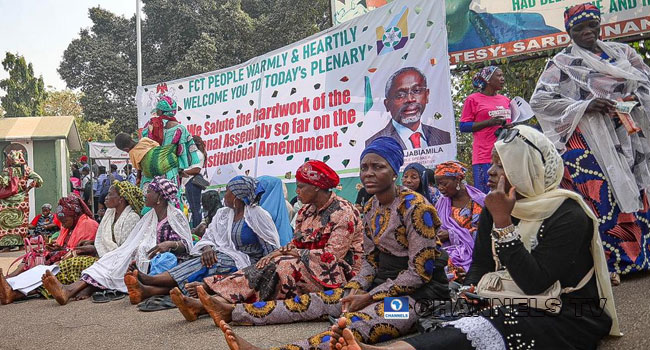 Various women groups on Wednesday occupied the gate of the National Assembly in protest against the rejection of women-related bills at plenary.

The lawmakers had on Tuesday rejected all women-related bills including the one seeking to give at least ten slots to women as ministers and commissioners in the federal and state governments failed at the upper legislative chamber.

In protest against this, the women gathered early on Wednesday morning at the three arm zone and marched to the National Assembly gate chanting songs of solidarity against the move by the lawmakers.

The women said they were disappointed despite having assurances from the leadership of the house on the bills.

The groups demand that the Federal lawmakers take another look at the requests for 111 seats for women, citizenship, 35% representation in party leadership, more appointive positions in government, and vote in favour of these amendments.

The groups gathered for the protest include the United Nations Population Fund (UNPF), Federation of Muslim Women Association (FOMWA), Women Organisation for Change in Agriculture and Natural Resource Management (WOCAN), Association of Women in the Arts (AWITA), Women In Business (WIMBIZ), Action Aid, Yiaga Africa, the Islamic Youth League, among others.

Although the gate of the National Assembly was shut, the women sat down at the gate and demanded that their voices must be heard.

The protest comes less than 24 hours after the bill seeking to provide special seats for women in the National and State Houses of Assembly, among other women-related bills failed.

One of the bills titled ‘Act to Alter the Provisions of the Constitution of the Federal Republic of Nigeria, 1999 to Provide for Special Seat for Women in the National and State Houses of Assembly; and for Related Matters,’ failed after most of the lawmakers voted against it.

The lawmakers during the plenary on Tuesday voted on 68 Constitution Amendment bills.

The bill for special seats for women was defeated in the Senate with 58 votes out of 91 while in the House of Representatives 208 out of 290 lawmakers voted against it.

In support of the bill, the wife of Vice-President Osinbajo, Dolapo attended the plenary on Tuesday. She, however, left disappointed after all the bills related to women in the constitution amendment failed.

Addressing journalists on her way out of the House chamber, Mrs Osinbajo said she remains hopeful that it is not the end of the agitation for women’s inclusion.

Also speaking on the outcome, the Minister of Women Affairs, Pauline Kedem Tallen, said the situation was a show of shame.