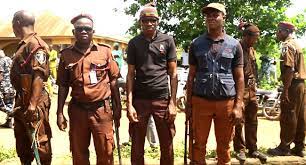 It was all wailing and crying at Oraifite street, Enekwasimpu Obosi layout, Idemili North Local Government Area, Anambra State, when a local vigilante operative, reportedly shot dead a 24 year old boy, said to be the only son of the bereaved family.

The deceased was said to have met his untimely death on the fateful day  when he was serving drinks to some vigilante operatives in his mother’s restaurant (Jekwu restaurant) as ordered by a groom in celebration of the marriage of a new wife.

According to an eye witness who pleaded anonymity, ” it was while the vigilante operatives were drinking that at a point, may be out of intoxication, one of them stood up and shot Into the air and stray bullet killed the boy that was serving them the drinks”

“Immediately the boy slumped and was rushed to Multicare hospital in the Area by the vigilante operatives that included the one that did the shooting and other sympathizers where he was allegedly confirmed dead by the medical director.

The mother of the boy was not around when the incident occurred but the bereaved family that hails from Nri, Njikoka Local Government Area of the state was being called on phone by neighbours when the incident happened, he further added.

Crying and wailing have continued to envelope the atmosphere there since the incident happened even as sympathizers cursed the vigilante operative that did the shooting.

“Imagine wasting the life of the Innocent boy, the only son of the family because he was given a gun. Does he know the rudiment of the gun he was giving, idiot like him” said a sympathiser.

“He should be made to face the wrath of the law, he was given free drink and he became mad and touched the trigger to waste the life of a growing young man” said another.

Contacted, the state Police Public Relations Officer, PPRO, Mr. Tochukwu Ikenga, said he was not aware of the incident but pledged to contact the Divisional Police Officer, DPO, in charge of the Area, Mr. Ekuri Remigius for confirmation.