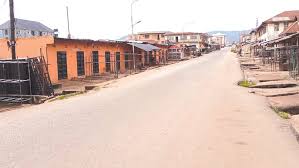 The Monday sit-at-home in Anambra state continued barely hours after the conduct of the gubernatorial election which has been declared inconclusive by the Independent National Electoral Commission, INEC, with most streets in the state completely shut down.

The roads, streets, markets, banks, courts, local government headquarters, among others were deserted and youths seen in most roads playing football and drinking.

Reacting, a resident of Oniitsha who simply identified himself as Obi, started that, “we have finished with the election and now back to the normal Monday, Monday sit-at-home, until Nnamdi Kanu is released”

“It is because we don’t want imposition of an administrator that we allowed for the conduct of the election.”

“You can see that every place is deserted now that we have returned to the normal Monday tradition” he affirmed.

Also reacting, a trader at Obosi, near Oniitsha, who pleaded anonymity, stated that, “after the rain come sun shine, the election is over and the state has returned to its normal sit-at-home exercise as part of protest against the continued detention of the leader of IPOB, Mazi Nnamdi Kanu”

“If not for the importance of the election we would have boycotted it, but we don’t want imposition , imposition is like military regime where the people will not have a say in the governance of the state”

“The markets, schools, banks, and offices are shut down but I know that with time this thing will come to an end, nothing is Permanent like the late Hon. Dr. Nnamdi Azikiwe said’

Meanwhile the ever -busy Oniitsha/Owerri, Oniitsha/Enugu and Oniitsha/Asaba/Benin/Lagos Expressways were completely deserted as they looked like ghost areas as at the time of filing this report.

Recall that IPOB withdrew its earlier order that there would be a five day sit-at-home which coincided with the gubernatorial election.