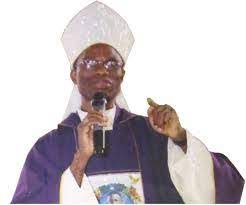 Catholic Bishops of Ibadan Ecclesiastical Province on Wednesday criticised the Buhari-led administration over nepotistic tendencies which they say have led the nation into unease.

The bishops, from the Ibadan Ecclesiastical province in a statement after their meeting at the Domus Pacis Pastoral Institute, Igoba in Akure, argued that the spike in insecurity across the country is occasioned by the government’s inabilities to serve on the principles of equity and fairness.

According to the communique signed by the province Chairman and Secretary, Rev. Gabriel Abegunrin and Rev. Akin Oyejola, respectively, the country is plagued by “inept, uncaring leadership which functions by selective allocation of posts, privileges, and resources and by selective application of justice”.

The clergymen lamented that the Buhari-led administration has cost Nigeria its soul, adding that this is the reason for the insecurity and economic woes experienced at this moment in the nation’s history.

Those Representing Nigerians Are Saboteurs

The Bishops also took a swipe at the National Assembly, stating that those representing Nigerians are saboteurs who have “perfected the art of sabotaging the progress” of the people they represent.

They urged Federal Lawmakers to prioritise the interest of Nigerians above those of their political and selfish ambitions.

In the passing weeks, there have been heated debates over electoral reforms, electronic transmission of electoral results, press freedom, and the Petroleum Industrial Bill (PIB), issues which the priests believe must only be tackled with the people’s best interest at heart.

They lamented that often “the work of those who represent the people on the federal level in Nigeria does not seem to bring much satisfaction to the people for whose interest they were allegedly elected, with the national assembly at various occasions prioritizing party and privileges over people’s rights and interests, relief and progress continue to elude Nigerians”.

The clerics condemned the passage of the amended Electoral Act and the Petroleum Industry Bill (PIB) and urged Nigerians to challenge the Senate and the House of Representatives’ decisions.

They appealed to Nigerians not to lose hope in the possibility of a peaceful, united, and prosperous country, urging the media and civil society groups to sustain the momentum on increased public awareness and education on the importance of political participation at all levels of governance.

In the priests’ opinion, it is indeed “time for Nigerians to no longer simply roll over and accept non-representative decisions of the assembly but to challenge them by all legitimate means”.