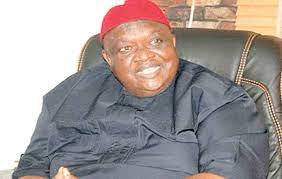 Chairman, Imo State Council of Elders Chief Emmanuel Iwuanyanwu has called on religious leaders and all Christian Faithful in the country to pray fervently for the speedy resolution of the series of security challenges ravaging the nation, particularly the devastating unprecedented insurgency.

Chief Iwuanyanwu noted that the unabated security challenges in the land had become a serious threat to the nation’s march to greatness hence the need for divine intervention to halt the disturbing situation.

He stated this at the St. Peter’s Catholic Church, works Layout Owerri where he laid the foundation stone of the church and donated the sum of N10 million for the building of the church.

The elder statesman who owns the land on which the church building is being erected despite giving out the land at a paltry sum had earlier, donated N9million for the project with an additional donation of N1 Million to the project.

Presenting a certificate of ownership to the church to ensure that no one claims ownership of the land, Chief Iwuanyanwu said that as an Anglican, he had always remained faithful to the Lord vineyard, adding that his belief in God knows no denominational barrier.

He thanked the Catholic Church for giving him the opportunity to lay the foundation of the church and gave an assurance that he would not only remain grateful for the singular honour, but would also continue to support the church.

Chancellor of the Catholic Archdiocese of Owerri, Rev. Fr. Samuel Uzoukwu on behalf of the Archbishop of the diocese – Most Rev. Dr. Anthony Obinna commented Chief Iwuanyanwu for his benevolence and contributions to the church.