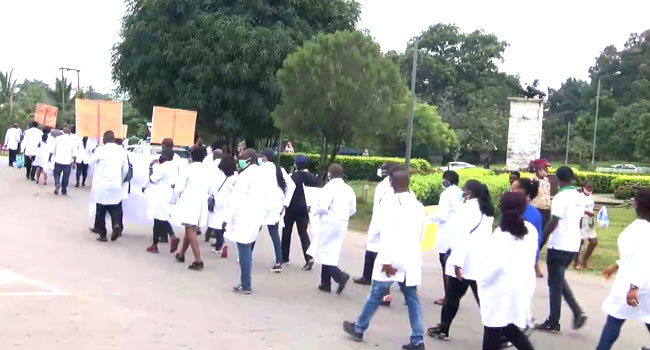 The Nigerian Association of Resident Doctors (NARD) will embark on a nationwide strike from Thursday, its leaders have said.

In a statement jointly signed by NARD President, Dr Uyilawa Okhuaihesuyi; its Secretary-General, Dr Jerry Isogun, and its Publicity/Social Secretary, Dr Dotun Osikoya, the union said the industrial action would be total and indefinite, should the Federal Government fail to meet its demands.

It explained that the decision to go on strike was taken at the extraordinary National Executive Council of the union held on Saturday at the National Hospital in Abuja.

During the meeting attended by over 50 chapters of the association across the country, the doctors reviewed the earlier ultimatum given to the government and scheduled to expire on Wednesday

In their resolutions, the doctors called for the immediate payment of all salaries owed to all house officers, including March salaries before the end of March 31.

They also asked the government to commence the immediate payment of all salary arrears, including March salaries to their members in all Federal and state tertiary health institutions

The union resolved to call for the upward review of the current hazard allowance to 50 per cent of consolidated basic salaries of all health workers, as well as the payment of the outstanding COVID-19 inducement allowance.

They also sought the immediate abolishment of the exorbitant bench fees being paid by their members on outside postings in all training Institutions.

A communique issued at the end of the NEC meeting read:

The Nigerian Association of Resident Doctors (NARD) held an extraordinary National Executive Council meeting on the 27th of March 2021 at the Trauma Center in National Hospital Abuja to review her earlier ultimatum and deliberate on burning issues affecting Residency Training, Healthcare Delivery and the Welfare of her members across the country.

The NEC was attended by over 50 Chapters of the Association across the country. After extensive deliberations, the following observations and resolutions were made;

The NEC observed that her earlier ultimatum given to the Federal Government during the January 2021 NEC meeting in Owerri will expire by 12 midnight on the 31st of March 2021 with no significant achievement.

The NEC reiterated her full support for the Central Placement of House Officers. Nevertheless, they decried the agony our members have been made to pass through for three months now without salaries despite uninterrupted service delivery to the nation. This is due to the inefficiency of the Registrar of MDCN in handling the processes of central placement of House Officers as approved by the Federal Executive Council since 2017.

The NEC bemoaned the suffering of some of our members in GIFMIS platform who have not been paid salaries for four months now due to delay in biometric capturing by IPPIS department.

The NEC noted that despite the efforts of NARD, the erroneously paid 2020 Medical Residency Training Fund (MRTF) to non-resident Doctors is yet to be addressed. Also, 2019, some of 2020 and 2021 MRTF are yet to be paid.

The NEC also observed the non-implementation of the Medical Residency Training Act (MRTA) in some institutions in the country, especially state-owned institutions.

The NEC noted the non-payment of the arrears of Salary shortfall dating back to 2014 to our members across the country including State-owned Tertiary Institutions.

The NEC observed that up till now none of our members have benefited from the Death in Service Insurance Scheme despite our constant engagement with the relevant stakeholders with the data of our colleagues who died in service to the nation.

The NEC noted the irregular and exorbitant amounts being paid as Bench Fees by our members on outside postings.

The NEC observed with dismay that the Act regulating Postgraduate Medical Training in Nigeria established in 1979 is yet to be reviewed.

They observed the alarming rate of brain drain of doctors and other health workers to foreign countries in the face of a severe shortage of manpower in all Government-owned hospitals across the country. This is because of lack of employment in most hospitals, poor remuneration, and poor conditions of service in the health sector.

The NEC unanimously agreed that NARD should proceed on a total and indefinite strike on the 1st of April 2021, by 8am if the following demands are not met.

Immediate Payment of all salaries owed to all house officers including March salaries (regardless of quota system) before the end of business on the 31st of March 2021.

Immediate payment of all salary arrears including March salaries for our members in all Federal (GIFMIS platform) and State Tertiary Health Institutions across the country especially ASUTH, IMSUTH, and UNIMEDTH.

Upward review of the current hazard allowance to 50% of consolidated basic salaries of all health workers and payment of the outstanding COVID-19 inducement allowance especially in State owned-tertiary Institutions.

Abolishment of the exorbitant bench fees being paid by our members on outside postings in all Training Institutions across the country with immediate effect.

Payment of Salary shortfalls of 2014, 2015, and 2016 to our members in all Federal Institutions including state-owned institutions as earlier agreed with NARD.

Payment of death in service insurance for all health workers who died as a result of COVID-19 infection or other infectious diseases in the country.

Universal domestication/implementation of the 2017 MRTA by all Federal Government and State-owned Training Institutions to ensure proper funding of Residency Training in the country as stipulated by the Act.

Immediate payment of 2019, the balance of 2020 and 2021 Medical Residency Training Funds (MRTF) to our members including those under state government employ.

Immediate implementation of September 2017 Memorandum of Terms of Settlement (MOTOS) between NARD and the Federal Government of Nigeria in order to bring lasting peace to the health sector and curb the ongoing ugly trend of brain drain from the health sector.

Immediate review of the Act regulating Postgraduate Medical Training in Nigeria in line with International Best Practices to remove the unnecessary rigors in Residency Training in Nigeria, one of the factors attributed to brain drain in the health sector.

Immediate commencement of employment into all Government-owned hospitals to improve service delivery to Nigerians, enhance Residency Training, and curb the attendant brain drain in the health sector.

It also demanded the reintroduction of medical super salary structure and specialist allowance for all Doctors as already approved for some other health workers. This will go a long way in ensuring peace in the health sector.

Finally, the NEC reiterated her commitment to the smooth running of all tertiary institutions in the country and the provision of specialist healthcare to Nigerians but urge the Federal Government to urgently meet the above demands in order to avert this avoidable industrial action.

Nobody Should Address Pantami As Professor – ASUU

Another strike looms as ASUU issues three-week ultimatum to FG

NECO says no extend of registration for 2021 SSCE internal candidates