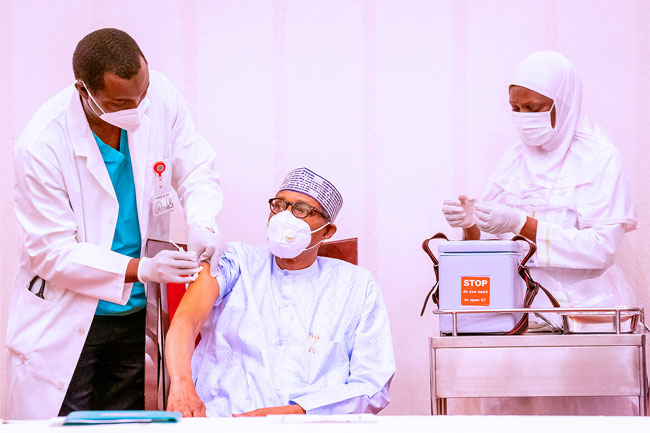 The Presidency has assured all citizens, that the vaccine administered to President Muhammadu Buhari and his vice, Professor Yemi Osinbajo, has no side effects on them.

In a short communique put out to dispel fears and misconceptions about the safety of the vaccine administered, Mr. Garba Shehu the Senior Special Assistant to the President said all has remained normal after the jabs.

“The President felt normal and went about doing his job.

“If there are side effects that follow, we will be open about that but so far there is nothing of a side effect, serious or mild on the President.

“He is carrying on as normal,” the statement partly read.

Mr. Shehu in his statement hoped that a strong message will be sent among the people, especially those grappling with hesitancy about the efficacy and safety of the vaccine.

President Buhari on Saturday received the AstraZeneca vaccine, a day after the Federal Government launched the vaccination exercise in the country.

He took the vaccine jab on Saturday at the new Banquet Hall of the Presidential Villa in Abuja, the nation’s capital.

The vaccine was administered to the President by his chief personal physician, Dr Sanusi Raafindadi,  in the presence of the Vice President, Professor Yemi Osinbajo, and some members of the Federal Executive Council (FEC).

Shortly after President Buhari took the vaccine jab, Professor Osinbajo also received the vaccine which was also administered to him by his chief personal physician, Dr Nicholas Audifferen.

President Muhammadu Buhari takes the COVID-19 vaccine jab at the Presidential Villa in Abuja on March 6, 2021.

Both leaders were later presented with electronic cards containing the details of their vaccinations by the Executive Director of the National Primary Health Care Development Agency (NPHCDA), Dr Faisal Shuaib.

Others who witnessed the vaccination of the President and his vice were members of the Federal Executive Council (FEC) and the Director-General of the Nigeria Centre for Disease Control (NCDC), Dr Chikwe Ihekweazu.