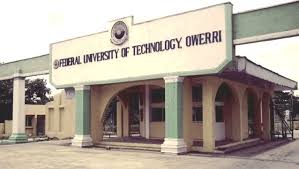 The management of Federal University of Technology Owerri (FUTO) has issued serious warning to land speculators on its land.

According to the Vice Chancellor Professor Francis Eze speculators and some members of host community are hereby advised in their own interest to stay away from lands belonging to the university.

He made it known that the management had not ceded any part of the land to anybody or group of persons.

The Vice Chancellor gave the warning while briefing newsmen, said that unabated encroachment of land belonging to the institution by the host communities had continued to pose an impediment to the development of the 41 year old premier university of technology in the country.

“We came in here  since 1993 and we have brought tremendous development to the host communities in addition to offer of employment and admission to deserving indigenes but surprisingly, what we are seeing now is encroachment of our land by the host communities”.

Out of pressure by the host communities for land, Eze said that the University had proposed to cede about 1000 hectares of her land to the agitators leaving about 3,500 hectares which must pass through normal due process.

He dismissed a Memorandum of Understanding (MOU) said to have been signed by the host communities and the university for the release of land to the former as fake which according to him was done without the consent and approval of the traditional rulers.

“We have a master plan and I have interest in the land that belongs to FUTO and that interest is for the common good and is not for personal aggrandizement.”

Eze – a professor of physics accused the champions of FUTO land appropriation of being driven by personal interest as against the over riding public good, stressing that the institution which is just entering into its second phrase of development needs land for expansion.

The federal government has not directed me to cede land to any individual and I objected because FUTO represents the Federal Government. What is happening now is a battle between the forces of darkness and light because in a few years to come, everybody will begin to appreciate all that we have accomplished”.

Greenfield University: Parents beg abductors not to execute the students